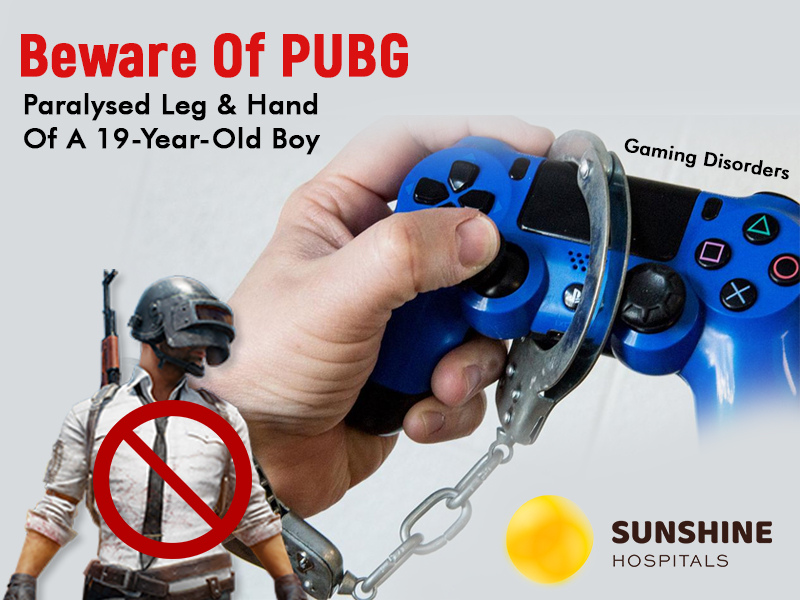 Is your kid a gamer?

If yes, then be aware that your kid is in a dangerous zone. Addiction to digital gaming or video gaming may result in blood clots in the brain, paralysis and many other neurological disorders.

Gaming Disorder is a rising concern these days, especially in teenagers. In 2018, the World Health Organization also listed gaming disorder as a disease in their International Classification of Diseases (ICD-11).

Story Of A 19-Year-Old Boy, Who Got Paralysis Due To Playing PUBG

Keshavardhan, a degree student got addicted to PUBG as he was playing it day and night. His entire focus was on the game and he started to consume very little food and water, and was severely sleep deprived. Having ignored his health, one of his legs and hands got paralysed and he lost sensation in both. He was also suffering from severe vomitings, diarrhoea and fever.

His parents took him to a nearby hospital but there was no improvement. On August 26, 2019, his parents brought him to Sunshine Hospitals Hyderabad. He was consulted by Dr. K Vinod Kumar, Senior Neurophysician who suggested few neuro tests. The brain scan revealed a clots in the brain due to thickening of venous blood, which affected the nerves associated with leg and hand.

Dr. Vinod clearly explained the situation to the parents and that the ailments were due to a compromised immune system. He prescribed a few medicines and recommended certain precautions to be taken. In a few days, Keshavardhan recovered and got back to his usual self.

Notice to parents: If you notice any unusual behaviour, it is never too late to stop or restrict your kids from playing addictive games. Always consult a doctor before the situation gets too serious.