Causes And Symptoms Of Stomach Ulcers & How To Treat Them?

Home  /  Blogs   /  Causes And Symptoms Of Stomach Ulcers & How To Treat Them? 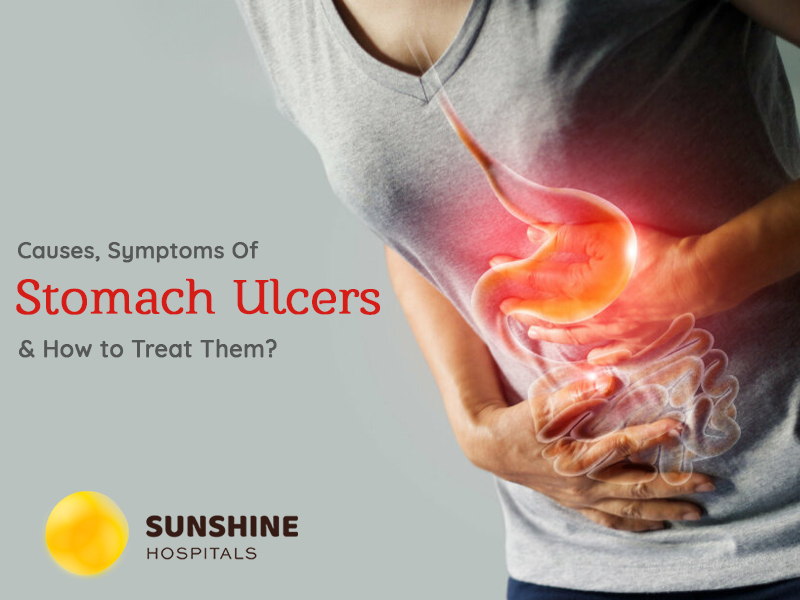 Causes And Symptoms Of Stomach Ulcers & How To Treat Them?

Are you suffering from heartburn?

Are you suffering from a dull or burning stomach ache?

Have you been confirmed with open sores on the stomach or intestinal mucosa?

Don’t worry that this is the most common symptom of Stomach ulcers. Then this blog is essential for you to provided by Dr Rohan P. Reddy from Sunshine Hyderabad Hospital to know about stomach ulcers, Causes of stomach ulcers, symptoms, diagnosis, treatment.

What is Stomach Ulcers:

Stomach ulcers are an open wound that develops on the inner lining of the stomach and in the upper part of the small intestine. The symptom that is most common with stomach ulcers is abdominal pain. Stomach ulcers occur when the lining that protects the gastric mucosa from stomach acid is damaged.

A stomach pain that has burning sensation is the most common symptom. The pain most often:

The most common cause is a bacterial infection called Helicobacter pylori. Another is the continued use of NSAIDs such as aspirin and ibuprofen. Feeling Stress and eating spicy foods do not cause ulcers, but can worsen it.

Ulcers are Usually Caused By:

How NSAIDs Cause Stomach Ulcer?

To understand how NSAIDs cause stomach ulcers, it is essential to know how NSAIDs work. Nonsteroidal anti-inflammatory drugs relieve pain, fever and inflammation or swelling.

Each contains two enzymes that produce chemicals in body cells that increase pain, inflammation and fever. NSAIDs block or reduce the number of enzymes your body produces. However, another type of chemical is provided with one of the enzymes that protect the gastric mucosa from the release of stomach acid, and that control bleeding. When NSAIDs reduce or block the amount of this enzyme, NSAIDs also increase the risk of stomach ulcers.

How do Zollinger-Ellison syndrome Cause Stomach Ulcer:

Zollinger-Ellison syndrome is a rare condition that occurs in the pancreas and duodenum. The tumour secretes large amounts of gastrin, a hormone that causes the stomach to produce large quantities of acid. Excessive acid causes stomach ulcers in the duodenum and upper intestine.

The digestive tract is covered with a layer of mucus which usually protects against acid. However, if the acid increases or the amount of mucus decreases, you can suffer from ulcers.

The most common symptom of an ulcer is a burning sensation in the stomach between the chest and navel. Usually, the pain gets worse when your stomach is empty and can last for several minutes to several hours.

Other common symptoms of ulcers include:

Talk to a doctor if you have signs of an ulcer. Although discomfort may be mild, sores can make worse if left untreated. Bleeding ulcers can be life-threatening.

Even if symptoms are mild, you may suffer from heartburn. Consult a doctor to discuss symptoms. Without treatment, stomach ulcers can get worse — Dr Rohan P. Reddy from Sunshine Hyderabad Hospital.

Diagnosis and treatment depend on the symptoms and the severity of your ulcer. To diagnose a gastric ulcer, your doctor will review your medical history along with its symptoms and prescription or over-the-counter medicines that you use.

To determine H. pylori infection, blood, stool, or breath tests can be done. In a breath test, you are instructed to drink clear liquid and breathe into the bag, which is then sealed. If H. pylori are present, the breath sample contains more carbon dioxide than usual.

Other tests and methods for the diagnosis of stomach ulcers include:

When should you see a doctor?

See your doctor right away if:

Stomach ulcers can get worse if left untreated. Treatment may include stomach acid-lowering drugs or antibiotics to kill H. pylori. Antacids and milk can not cure heartburn. Smoking and avoiding alcohol can help. Surgery may be needed if your ulcers do not heal.

Treatment depends on the cause of your heartburn. Most ulcers can treat by prescription, but in rare cases, surgery may need.

It is important to treat an ulcer immediately. Talk to a doctor about treatment plans. If you have an active bleeding ulcer, you may be hospitalized for intensive endoscopy and IV treatment. You may also need a blood transfusion.

Our doctor will give you antibiotics to treat H. pylori infection. You should take it for two to three weeks. A doctor may also recommend triple therapy. This is a combination of antibiotics and antacids (Pepto-Bismol). A doctor may suggest medicine to reduce stomach acid. You may need to take it for up to 8 weeks. Various other drugs can be used to treat ulcers.

In addition to this treatment, your doctor may also recommend:

Ulcer symptoms can quickly disappear with treatment. Even if your symptoms go away, you should continue to take medication as prescribed by your doctor. This is very important in H. pylori infection to ensure that all bacteria are eliminated from the body.

In sporadic cases, complicated gastric ulcers must be operated. This might apply to sores that:

If you are suffering from an ulcer, then avoid some foods that make ulcer pain worse that includes avoiding spicy foods, alcohol and smoking. If you are a candidate to take aspirin or ibuprofen for chronic pain, talk to a doctor. A doctor may suggest an alternative. Keep your balanced diet. Try eating less, frequent meals when you’re feeling pain in the stomach.

Please schedule an appointment with our Medical gastroenterologist Dr Rohan P. Reddy from Sunshine Hyderabad Hospital for any further queries you may have in this regard. You can reach us at 04044550000.