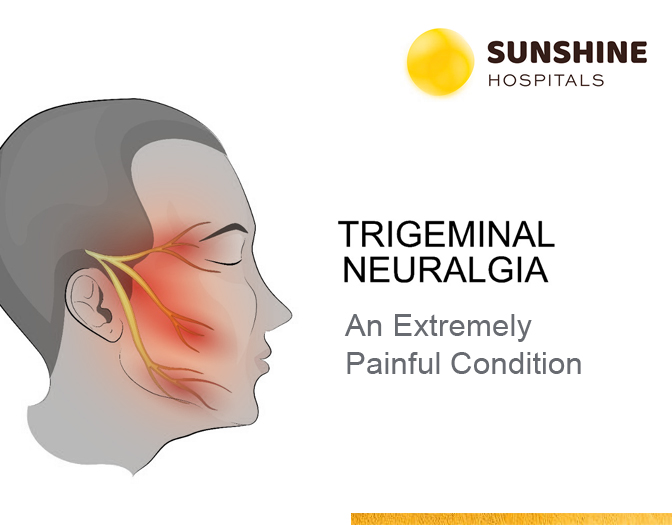 Trigeminal neuralgia (TN) is the most excruciating and continuous painful condition (neuropathic pain). It is also known as tic douloureux. The 5th Cranial nerve or the trigeminal nerve is one of the most widely distributed nerves in the head. When this nerve is affected (due to a nerve lesion or injury) a person feels severe pain in the facial and the head region that it controls. The pain associated with this condition is progressive, severe, intense, sporadic and sometimes like an electric shock. The pain may last for a few seconds to a few minutes per episode. And the attacks can occur in quick successions lasting for hours. The pain is mentally and physically debilitating.

TN affects women more often than men. Those who have this condition may experience a sudden and severe pain with even mild stimulation of their face while putting on makeup or brushing teeth. Initially, bouts of painful attacks are mild, short and less frequent, but as TN progresses, it causes severe, lasting and more frequent bouts of painful attacks.

Trigeminal nerve (TN) belongs to one of the 12 pairs of nerves (cranial nerves) connected with the brain. One TN runs to the right side of the head, while the other to the left side.
Each nerve divides into three branches after it leaves the brain and moves inside the skull: 1. Upper branch (ophthalmic branch) 2. Middle branch (maxillary branch) 3. Lower branch (mandibular branch)

Middle Branch or Maxillary Branch: you feel sensations in the upper jaw, cheek, teeth and gums (upper gums), top lips (upper lip), lower eyelid, nostril and to the side of the nose as this branch stimulates and carries sensations to the brain from these areas.

Lower branch or Mandibular Branch: You feel sensations in the lower jaw, lower gums and teeth, lower lip and also the muscles involved in chewing as this branch stimulates and control sensations in these areas.

The type 1 trigeminal neuralgia (TN1) is a typical condition, which is associated with sudden, extreme and burning facial pain that comes in episodes – each painful episode may last for a few seconds to minutes. The attacks are quick, simultaneous and sporadic and may last for a few hours.

The Types 2 trigeminal neuralgia (TN2) is an atypical condition, which is associated with stabbing and burning pain of rather lower intensity than the TN1. You may experience any of the two forms or both the types at the same time.

The pressure that develops on the nerve due to the contact of an artery or vein at the base of the brain alters the normal functioning of this nerve. A disease such as multiple sclerosis that damages the myelin sheath of the nerves can also cause TN. The other causes of trigeminal neuralgia may include ageing, a brain tumour that compresses the nerve, facial trauma, stroke, surgical injuries, lesions and other abnormalities of the brain.

There are some triggers that stimulate the pain associated with trigeminal neuralgia. They include washing your face, smiling, talking, shaving, touching your face, brushing your teeth, drinking, eating and chewing. Drinking hot or cold beverages, blowing the nose, and putting on makeup. Even exposure to a breeze can also trigger pain.

For a neurosurgeon, finding the exact cause of your pain is important as treatment differs according to different types of pain. For instance, temporomandibular joint disorder (TMJ) can cause jaw and muscles pain that control the jaw movement; cluster headaches and post-herpetic neuralgia can also cause facial pain. Therefore, prior to the diagnosis of trigeminal neuralgia, other disorders should be ruled out.

Your doctors will diagnose trigeminal neuralgia based on the description of your symptoms and your personal history of pain – in addition to performing neurological and physical examinations. While you describe your symptoms to the doctor, he or she will ask you about the type of pain, its location, and the triggers that are stimulating the pain. Several tests may be ordered to determine the underlying cause of your pain.

During a neurological examination, your doctor touches the parts of your face to determine the location of pain and to know which branches of the trigeminal nerves are affected. Reflex tests are also performed to rule out nerve compression or other condition.

There are many different conditions that can cause your facial pain; therefore, accurate diagnosis is crucial. For instance, an MRI scan of the head may be ordered to determine whether a brain tumour or multiple sclerosis is the cause of trigeminal neuralgia. To confirm compression on the trigeminal nerve by an artery or a vein, special sections in MRI Scan of the brain are advised for that region to demonstrate a neurovascular conflict.

There are several treatment options available, which means you need not have to suffer for long. The pain associated with this condition is quite debilitating – therefore, to relieve pain anticonvulsant drugs that block nerve firing are usually prescribed, but they are less effective in TN2 cases.

Common opioids and analgesics are not effective in treating shooting and sharp pain as experienced in TN1, but some people with TN2 may get relief. Antidepressants can also be used to treat pain. However, for those who have become unresponsive to medical therapy and also bearing the adverse effects of medicines, such as allergy, excess fatigue, cognitive disturbances – surgery is indicated as an effective option. Furthermore, trigeminal neuralgia is a progressive condition and may become tolerant to medication over time; therefore, surgical treatment is often recommended. Several neurosurgical procedures are available for trigeminal neuralgia treatment in Hyderabad at Sunshine Hospitals, depending on the nature of the pain; the individual’s preference and physical health.