Who Gets Rheumatoid Arthritis ? 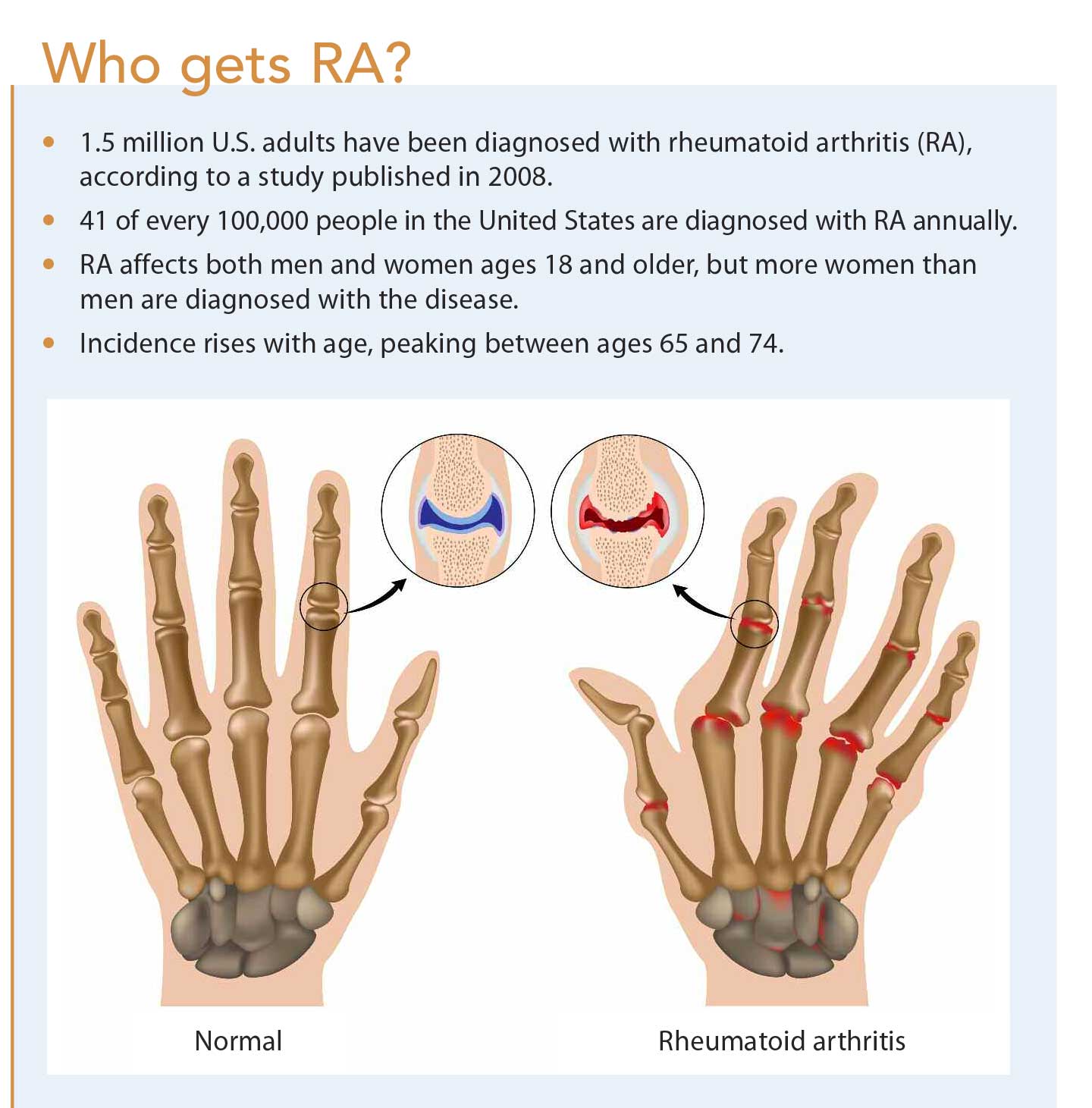 Who Gets Rheumatoid Arthritis ?

RA (Rheumatoid Arthritis) is an autoimmune disorder that causes inflammation of the lining of the joints. The body tissue is mistakenly attacked by its own immune system. RA may also affect the skin, eyes, lungs, heart, blood, or nerves. Rheumatoid arthritis is a chronic disorder.

Rheumatoid Arthritis Symptoms
Joint inflammation from RA comes with pain, warmth, and swelling. The inflammation is typically symmetrical, occurring on both sides of the body at the same time (such as the wrists, knees, or hands). Other symptoms of RA include joint stiffness, particularly in the morning or after periods of inactivity; ongoing fatigue, and low-grade fever. Symptoms typically develop gradually over years, but can come on rapidly for some people.

Who Gets Rheumatoid Arthritis?
RA usually strikes between ages 30-60, but younger and older people can also be affected. Rheumatoid Arthritis occurs two to three times more often in women than in men. Other risk factors include cigarette smoking and family history.

Rheumatoid Arthritis Causes
Immune cells normally protect the body from foreign invaders. What causes them to target healthy joints and tissue is unknown. Researchers believe some combination of genetics and environmental factors may play a role. There may be a genetic tendency in some people who, if they develop an infection with a particular bacterium or virus, go on to develop the condition. But to date, no specific infection has been identified.

RA’s Toll on the Joints
Inflammation of the lining of the joints can destroy cartilage and bone, causing deformity of the joints. As the condition progresses, joints can develop considerable pain and loss of function.

RA’s Toll on the Body
RA can affect organs and areas of the body other than the joints, including:
Rheumatoid nodules (shown here): firm lumps under the skin and in internal organs
Sjogren’s syndrome: inflammation and damage of the glands of the eyes and mouth; other parts of the body can also be affected

Juvenile Rheumatoid Arthritis (JRA)
Juvenile RA is the most common type of arthritis in kids. Like adult RA, it causes joint inflammation, stiffness, and damage. However, it can also affect a child’s growth. Juvenile RA is also known as juvenile idiopathic arthritis. “Idiopathic” means no known cause

RA and Pregnancy
Surprisingly, rheumatoid arthritis improves in up to 80% of women during pregnancy. It will likely flare up after delivery. How and why this happens is still unclear. Changes in your medication may be necessary before you become pregnant and during pregnancy.

Diagnosing RA: Blood Tests
If RA is suspected, your doctor may order blood tests to check for markers of inflammation in the body. Other common tests are for rheumatoid factor (RF) and anti-cyclic citrullinated peptide (anti-CCP), which is present in most people with RA
Diagnosing RA: Imaging Tests
X-rays are helpful in diagnosing RA and to provide a baseline for comparison later as the disease progresses. An MRI or ultrasound may also be done to help detect joint damage and inflammation.

Treating RA
There is no known cure for RA. The goal of treatment is to reduce joint inflammation and pain, prevent joint damage, and maximize joint function. Aggressive treatment should be started as early as possible. Rheumatoid Arthritis Treatment includes a combination of medication and exercises to strengthen supporting muscles around the joints. Treatment may also include surgery. Treatment is tailored to the individual, taking into account their age, affected joints, and the progression of the disease.

Is Surgery an Option?
After significant joint damage has occurred or when pain or disability becomes unbearable, some people choose surgery to improve function and relieve pain. Joint replacement is the most frequently performed surgery for RA patients — with the knee and hip joints most often replaced. Other types of surgery, such as arthroscopy (inserting a tube-like instrument into the joint to see and repair abnormal tissues) and tendon reconstruction, can be performed as well

RA and Diet
The most important diet is a healthy one that is balanced in nutrients. Although there’s no “arthritis diet” per se, many RA sufferers report that eating or avoiding certain foods helps their symptoms. Foods high in saturated fats (bacon, steak, butter) have been shown to increase inflammation in the body. Some people with RA find a diet high in omega-3 fatty acids (salmon, tofu, walnuts) helpful. Some people feel that other foods — such as tomatoes, citrus fruits, white potatoes, peppers, coffee, and dairy — worsen RA symptoms.